The marine energy industrial sector in Brittany is now launched. Composed of 165 companies, an ecosystem dedicated to research and innovation, training, and dedicated infrastructures such as MRE ports or test sites, it is being deployed to support the region’s energy transition.

The Bretagne Ocean Power association coordinates the action of all these Breton economic players linked to marine energy and is the dedicated and identified contact for national and international contractors.

Its ambition is to accelerate the industrial development of the sector, to direct the activity of the Breton port hinterlands, primarily Brest and Lorient, and to make Brittany a recognized marine energy region in France and internationally.

Bretagne Ocean Power is made up of 7 founding members, including BDI, which is actively contributing to this regional dynamic, in particular by piloting the Bretagne Ocean Power association and providing its skills in engineering, European projects, communication and attractiveness.

The missions of Bretagne Ocean Power :

The tools at your disposal :

Consult all our services

The Franco-British TIGER project is a European Interreg France (Channel) England project which aims to demonstrate the economic viability of tidal energy so that it can become part of the energy mix in England and France. It brings together 19 partners (industrialists, researchers, energy companies, development agencies including BDI) for 4 years and has a budget of 46.8 million euros (including 28 million in ERDF funds), in order to :

The final objective is to reduce the cost of tidal power and to make the technology more reliable. Thus, of the 4 test sites identified, 2 are in Brittany (the other 2 are in England):

Bretagne Ocean Power is mobilized to identify supply chain partners and research players who can bring expertise and know-how to the projects being tested in Brittany.

BDI has mobilized its know-how to deploy dedicated communication to promote this tool: visual identity, website for the Paimpol-Bréhat test site, promotion through participation in trade fairs, creation of content and promotion on social networks. 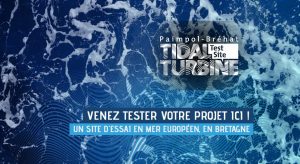 This contribution co-finances the €12 million raised by the partners for a total of €18 million to fund collaborative R&D activities to test and validate ocean energy technologies: wave, tidal, tidal, ocean thermal and osmotic energy. In addition to funding these projects, the consortium partners will work together to develop and implement actions to facilitate the joint programming of R&D funding, knowledge transfer and the exploitation of the results of funded projects.
The Regional Council of Brittany has invested €1M in this project, for which BDI is in charge of communication. In Brittany, 3 projects funded for a period of 2 years have just been launched. They concern anchoring systems, the reduction of installation costs for tidal turbine foundations and the use of data to reduce energy costs.

In this Interreg Channel project, Breton partners (the Syndicat d’énergie et d’équipement du Finistère, the Pôle Mer Bretagne Atlantique, the Brest Iroise and Quimper Cornouaille technology parks) and English partners (University of East Anglia, Exeter, Plymouth and Marine South East) have joined forces to implement a range of energy management solutions. Two demonstration sites have been selected: the University of East Anglia campus and the island of Ushant, where the objective will be to better integrate the production of marine renewable energy from the Fromveur current and to validate the autonomous or island energy models. Coordinated by BDI, the project will run for 4 years and has a total budget of €8.3m (including €5.8m of ERDF – European Regional Development Fund).