Bretagne Développement Innovation, and its program Eurolarge Innovation, support the international opening of the Breton sector. A unique ecosystem in the world, the Bretagne Sailing Valley® is attracting a growing number of foreign skippers and clients with a growing reputation. What are these foreigners looking for in Brittany? We asked Yann Penfornis, Managing Director of Multiplast and Yann Dollo, Deputy Managing Director of CDK technologies. 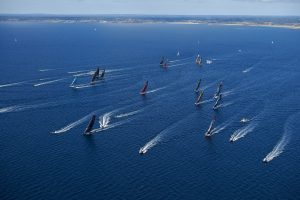 The ecosystem of the Bretagne Sailing Valley® is particularly favorable. It brings together all the skills involved in competitive sailing, organized into an integrated and complete industry.

“It’s a unique ecosystem in the world,” explains Yann Penfornis, Managing Director of Multiplast (Vannes, 56). “I don’t know of any other place on the planet where you can build so many boats and have architects with so much originality, all in the same area”. “Yann Dollo, deputy general manager of CDK technologies, said the same thing: “We realized that there was a concentration of a complete industry, not just boats in the water and teams.” And the customers, by being on site, are close to the manufacturers.

Carole Boulon, in charge of the competitive sailing sector at BDI agrees: “This emblematic characteristic of Bretagne Sailing Valley® allows us to make the sector attractive, both in France and internationally. ”

An excellence sought after abroad

This diversity and excellence have crossed borders. More and more skippers are coming to Brittany to take advantage of these skills. “Foreigners know that the know-how is here. Over the years, a whole ecosystem has been set up to respond to requests. Today, this represents a solid experience,” says Yann Penfornis.

As early as 2017, a partnership with the Yacht Racing Forum (often referred to as the Davos of competitive sailing) has enabled Breton companies to take a step forward on the international stage, culminating in 2018 with the hosting of the event in Lorient. Contacts are taking shape.

As a symbol of this international influence, contracts with foreign skippers are piling up. “We have just signed an Imoca boat with the German skipper Boris Herrmann,” says Yann Penfornis.

About this concentration of skills in Brittany, Boris Herrmann, who created a sensation during the last Vendée Globe, told Ouest-France that the choice of the architect VPLP was partly because it is located near the shipyard: “And then they are neighbours of Multiplast in Vannes with whom we also wanted to work, because it is an excellent shipyard. ”

« This boat should be put on the water this summer and has the ambition to participate to the Jacques Vabre transat than the Ocean Race, precised Yann Dollo. This allow us to be visible on other continents, other races circuits and promote the breton excellence in the offshore sailing. »

Yann Penfornis sees many foreign teams soliciting him: “At the moment, we manufacture foils for the American team “11th Hour Racing“. This same team is having its Imoca manufactured by CDK technologies. “This boat is due to be launched this summer, and its ambition is to participate in the Transat Jacques Vabre and the Ocean Race,” explains Yann Dollo. This allows us to be visible on other continents, on other race circuits and to promote Breton excellence in the field of ocean racing.

Charlie Enright, skipper of 11th Hour Racing, spoke in 2020 of a real “Imoca culture” that convinced his team to come to Brittany: “That’s why we decided to train in Brittany, because it’s a class dominated by the French. The best way to get close to this talent was to immerse ourselves there to get the know-how and experience we needed to win with the Imoca class. “

A dynamic supported by BDI and its Eurolarge Innovation program

To materialize the vitality of this unique ecosystem in the world, BDI has created the Bretagne Sailing Valley® brand. This banner, at the service of the players, allows the industry’s know-how to shine, particularly at professional events.

“We were present with BDI at the Yacht Racing Forum in Bilbao in 2019 under the Bretagne Sailing Valley® banner. This kind of show allows us to increase our visibility,” explains Yann Penfornis. BDI’s support for events is appreciated: “Beyond the cost, which is partly covered by the Brittany Region, the preparation, logistics and communication that we do not have to take care of are a real plus,” says Yann Dollo.

BDI also organizes briefings and conferences. Since 2016, 12 meetings have brought together high-level experts on specific topics. At the time of Covid, these meetings have been dematerialized and have become the Bretagne Sailing Valley online techtalk and had find their audience. and have found their audience. For Yann Dollo, who was a speaker at the event « The Bretagne Sailing Valley online techtalk are convivial times and allow us to unite a community of aficionados, while promoting the industry.»

BDI also sends out a quarterly bilingual newsletter (French/English) for the sector, so that no one miss out on any of the economic and technological news, as well as studies and skills directories.